On the day of June 11, 2020 a person being held at the Virginia Center for Behavioral Rehabilitation (VCBR) stabbed a fellow inmate fourteen times during their line up for their daily pill calls. The victim was stabbed behind the ear and back repeatedly. The victim was soon rushed to a nearby hospital to get stitches. Piedmont Regional Jail has the alleged assailant being held on assault by wounding with stab cut wounds and he is also charged with a misdemeanor according to officer D Wade.

The alleged assailant was transferred from VCBR to Piedmont Regional Jail  and charged by magistrate, so it was not detected via police scanner. The transfer to Piedmont Regional Jail happened on June 12, 2020 approximately at 11:23 am. JFP called both Virginia State Police and Nottoway county police at 3:01 pm, and neither knew of the incident at VCBR. Sargent Chambers of the Virginia State Police stated “We have no record of anyone from this office responding to a call from VCBR”.

JFP has questions regarding the alleged assailant arrest that are yet unanswered. Who arrested the alleged assailant? Was he questioned? Was he read his Miranda Rights first? Was his attorney called? Was he given an opportunity to make a phone call? This is a serious allegation, with a lot of unanswered questions. JFP will not stand for VCBR’s under the table system regarding the safety of the people in their facility.

A family member of a person being held at VCBR described the chaotic scene, as he was an eyewitness to the attack. She describes the eyewitness account of which her relative saw. “He was standing next to the wall, during the pill call, and all of a sudden a man came behind the inmate and stabbed him  in the ear and back fourteen times and then he fell into a chair”. She explains “There were no guards monitoring the line up, the women guard was in the office, while the male guard was nowhere to be seen. As the victim fell into a chair, they all shouted out for help.” The eyewitness explains that the guards were helpless, stating “the woman guard rushed out and stated “I do not know what to do” and watched the incident unfold”. The eyewitness states “the attacker went back into his cell to try and hid his shank, and after twenty to thirty minutes the guards finally came in after him”.

The Virginia Center for Behavioral Rehabilitation or VCBR opened in 2008 and is located in Burkeville, VA. VCBR is operated by the Department of Behavioral Health and Developmental Services (DBHDS). This facility indefinitely holds persons who the state asserts “because of a mental abnormality or personality disorder, finds it difficult to control his predatory behavior, which makes him likely to engage in sexually violent acts”(Virginia code § 37.2- 900). However, it seems as though VCBR is confusing a treatment center, with a prison-like environment. VCBR refers to the people in the facility as “residents”, however they are treated like inmates in a prison. In addition, every person at this facility has already completed their prison sentence, and many of them have been held years after their expiration sentence. There are currently 404* “residents” at VCBR according to B. Aderly who works as the Safety Security and Treatment Technician (read guard) for the facility. This means that all 404 “residents” have already served their time, and are now being indefinitely warehoused within this little known facility. 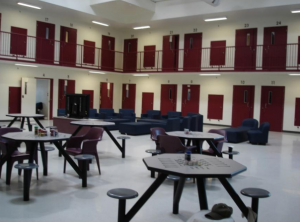 The family member of the person currently in this facility states “They treat them like animals, there were no guards to help the person who was stabbed, and the women guard just stood there”. She continues “I am scared for his life while he is in VCBR, what if he is the next one to get attacked? I can not take this anymore”.

VCBR states that they provide “ treatment in a secure environment” (vcbr.dbhds.virginia.gov).  However, in this case it is evident that DBHDS is  not providing a safe environment for the person assaulted.

This investigation is ongoing, and will be updated as information is released. 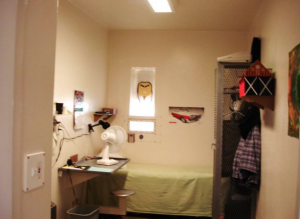