The use of supervised release to oppress formerly incarcerated people is among the American legal system’s most egregious injustices. America is very creative in finding ways to suppress the rights of people living in the community who are on supervised release. Approaches like the notorious sex registry are infamous examples of the American penal system oppressing formerly incarcerated people with draconian, unjust, and objectively unsupportable methods. One of the criminal justice system’s more subtle forms of human rights suppression comes in the form of “technical violations” — infractions of rules imposed by the state on people who are on probation or parole (legally different concepts that functionally represent virtually identical forms of supervised release) that often lead to incarceration.

Technical violations by definition do not include illegal behavior, and they can be as simple as someone accessing the internet or taking a sip of alcohol. Other common technical violations of supervised release conditions that send people behind bars include failing to pay one’s parole fees, missing a scheduled meeting with one’s parole officer, and not making it home from work before curfew. According to a report by The Council of State Governments Justice Center, many people on parole have to meet an average of ten to twenty conditions a day. With so many restrictions, supervise release can be a matter of when, not if, the person is going back to prison.  A true indictment of these systems: many incarcerated people opt to waive their parole hearings entirely, not wanting to feel caged within their own homes. 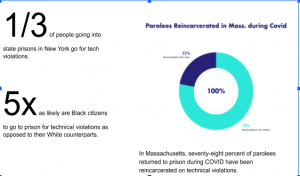 Even more palpable than the effects these regulations have on prison populations is the effect they have on the parolees themselves. The looming threat of reincarceration takes a devastating psychological toll on those who are on parole and under technical constraints. “It’s like walking on eggshells 24/7,” Jonathan Best says, describing his life while on parole. “Sometimes I would rather just go back to prison.”

During a Zoom webinar hosted by Harvard Law School in conjunction with the Charles Hamilton Houston Institute for Race and Justice, Best shared that he feels as though he is “dying inside” and that his family and friends are the only things that keep him going. However, he struggles to socialize with close family and friends, such as his ex-wife, due to his inability to associate with other people with criminal records, another limitation set by his parole.

Twenty states and the federal government have instituted “civil” laws allowing them to control (or “manage”) persons with a past sex-related conviction after they have completed their criminal sentence and outside of the scope of the extant criminal law. These laws predominantly include a “conditional release” component (called “Strict and Intensive Supervision and Treatment” [SIST] in New York) that allows for a sort of ‘parole’ to law enforcement supervision in the community from the civil confinement facility.  In the process, they have effectively created a new form of community supervision — a parallel probation or parole regime that functions like (largely invisible and unknown) shadow criminal legal regime. Unlike the traditional criminal legal system, this new shadow system has virtually none of the procedural protections and rights that define the American justice system.  Because the stated objective of the civil system is not to “punish” but to “treat,” there are far fewer safeguards against abuses by the state. This new system is plagued with all the same problems inherent in mainstream probation and parole systems, compounded by a whole new layer of other problems. People are routinely returned to a “secure facility” based on technical violations that are not crimes and would be perfectly legal for any other member of society. And they are liable to die there, given that these commitment orders are indefinite and often life long.

Just as with the arguments against other forms of lengthy supervised release sentences, evidence has shown that these systems are unnecessary and counterproductive. In Virginia, for example, of 483 persons granted “conditional release” under the “Civil Commitment of Sexually Violent Predators” Act (Virginia Code § 37.2-900 et seq.) since its inception in 2003, less than 2 percent (1.8 percent) have been accused of a new sex-related crime — and virtually no one has been convicted of a new “sexually violent offense” despite having been labeled by the act as “so likely to commit future acts of sexual violence.”  Meanwhile, more than 143 people have been re-imprisoned at Virginia’s shadow prison for technical rule violations (largely involving substance or alcohol use).

How you can help

Technical violations stand as an egregious breach of human freedom, and they are an aspect of our criminal justice system that must be heavily reformed. As it stands now, parole and probation are acting contrary to their intended purposes, serving as a driver of mass incarceration instead of a means of rehabilitation and helping people get back on their feet. A report by Human Rights Watch regarding parole and probation reform published earlier this year offered numerous recommendations, such as divesting from probation and parole and lessening the use of supervised release sentences. Another report by Pew Charitable Trusts suggested adopting shorter supervision sentences and supporting community supervision agencies. A bill in New York is already seeking to reform probation and parole on a significant, statewide level. The New York Less is More: Community Supervision Revocation Reform Act aims to reduce imprisonment for technical violations by eliminating reincarceration as a potential sanction.

With COVID-19 emphasizing the need to reduce prison populations, technical violations are being brought to the attention of more and more people — both elected officials with the power to do something about this problem and regular people who can demand change from their government — and now is an ideal time to do away with these oppressive and counterproductive measures. The first step is for all of us to reach out to our locally elected officials and to make the issue heard. Please help us bring attention to the issue and the Less is More Bill by sending this article to your family and friends and sharing it on your social media platforms.