Included below is a letter from Mr. Saengchanh, a fellow detainee at MSOP in Minnesota.

“Mr. Saengchanh’s letter illustrates the injustice of detaining someone who has serious language barriers. He cannot study law as easily as an English speaking person can. He cannot communicate with his therapist as effectively either. There are some random words in English and Laotian. This is normal for Mr. Saengchanh, who is always trying to learn English, yet always feels that it’s never enough. The letter also illustrates Mr. Saengchanh’s respect for his roommate, “John” and advocates for him lovingly.” – Daniel A. Wilson

Also, here is a sketched caricature of one of the CO-founders of OCEAN, Daniel A. Wilson. 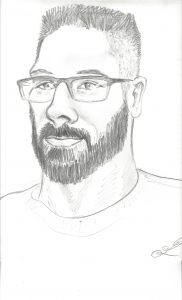