Home home Cost of the Shadow Prison in California

Cost of the Shadow Prison in California

California spends the second most money on prisons per capita in the nation. Especially now, with the pandemic ravaging our economy — at every level from local municipalities to the national tax base — state governments are left with difficult budgeting decisions to make. While congress has the luxury of deficit spending, individual state governments are constitutionally barred from going into the red. But it is impossible to balance a budget during the worst fiscal downturn since the Great Depression while spending the same amount of money as they were in the “before times.” One easy solution to their money problem would be to eliminate their shadow prison program.

In 2009, the annual cost of running California’s civil containment prison, Coalinga State Hospital, was $117,383,741. A decade later, that number shot up to $298,184,000 in 2019. That is a 254 percent increase over ten years. The average cost per person at California’s gulag in Coalinga last year was $218,114.26 per year. That same year, In the state’s (overt) prison system (the California Department of Corrections and Rehabilitation, of CDCR), the average annual cost per person in custody was $81,203. There is a $136,911.26 difference between the cost of a person in the prison system versus the shadow prison. The state of California spends almost triple the amount of money on holding persons who have already completed their sentences as they do rehabilitating people in prison while they are actually serving their sentences. 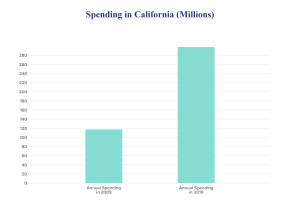 This imbalance makes absolutely no sense. The people being held at Coalinga — California’s “not a prison” prison —  have already completed their sentences and repaid their debt to society. These people are being indefinitely detained under false pretenses. California’s shadow prison is classified as a “State Hospital” and receives funding from the tax revenue allocated to healthcare for Californians. The California Department of State Hospitals (DSH), which runs Coalinga in addition to its (genuine) mental health facilities, had a total budget of $1.84 billion in 2019 — up $259.3 million in just one year. This is comparable to the entire state budget for the prison system: $1,139,429,000. There are only five of these mental hospitals run by the DSH, yet they spend more taxpayer money than the entire prison system in California — the largest prison system in the country. 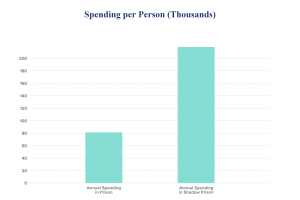 This is a staggering amount of money to spend on an unproven program attempting to prevent crimes that are already extremely rare from a statistical standpoint. Without these facilities draining the budget for State Hospitals, more could be done to rehabilitate and treat those with mental illness who need residential treatment space.

These facilities make a mockery of residential mental illness treatment. By using the California state hospital system to warehouse people who are prisoners “not patients,” they create less bed space for those who actually need mental health treatment while significantly draining already limited resources from those patients. During this global pandemic, which has decimated the national economy, there is a real question as to whether state budgets will be able to continue these shadow prisons. As dark as this pandemic has been, a silver lining may be the new economic incentive to end systems of  pre-crime preventative detention.