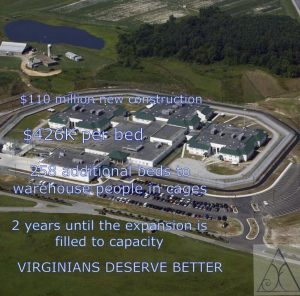 Virginia is rapidly running out of space at it’s pre-crime preventative detention facility to warehouse prisoners after the completion of their criminal sentence. In June 2018, the commonwealth broke ground on a massively expensive construction project to expand the current “not-a-prison” prison to add beds. Strangely, the commonwealth doesn’t seem to actually know how many beds they are building.

The Virginia General Assembly approved the double-bunking of 150 cells at VCBR in 2011, which increased their total capacity to 450 beds.

632 beds (according to the Secretary of Health and Human Resources) minus 450 current beds at VCBR equals an additional 182 beds added through the VCBR expansion.

I looked up both the sources from Frank Green and our correctional news article, and these numbers don’t add up, as there a difference between the two sources, so what gives?

According to Correctional News article “HDR, an international design and architecture firm based in Omaha, Neb., signed on to design the expansion and renovation of the facility in 2013”

258 – 182 = a difference of 76 beds (There is a difference between the figure offered by Michael Schaefer and the figure cited by the Secretary of Health and Human Resources).

“Virginia Center for Behavioral Rehabilitation” (or VCBR) is a label DBHDS uses to indicate the locked institution it uses to hold persons by force for “control, care, and treatment” under Virginia Code § 37.2-900 et seq., Virginias so-called “Civil Commitment” of sexually violent predators Act. As such, there have been multiple iterations of VCBR since the first person committed under Virginia’s pre-crime preventative detention scheme was interned against his will in the first week of December 2003.

Originally, VCBR “opened and temporary quarters to house and treat sexually violent predator [sic] in Dinwittie County in October 2003 (SVP Forecast 10/01/10, @p. 5). At the time DBHDS went by a different name, DMHDMRSAS. This original temporary facility had “an ultimate capacity of about 96 beds” (SVP Forecast 11/01/06) and was a repurposed facility that was originally designated to house persons labelled “mentally retarded.” Sometimes labelled VCBR Petersburg in state report (SVP Forecast 10/01/07 @p. 15, Figure 2 “SVP Census and Facility Projections”), this first iteration of VCBR has been variously described as both “on the campus of Central State Hospital in Dinwittie County” (SVP Forecast 06) and “on the grounds of Southside Virginia Training Center” (JLARC 2012 @p. 9).

A new permanent facility in Nottoway County was completed in January 2018 with 300 beds and a price tag of $62 million. This facility is sometimes called “VCBR Nottoway” and other times “VCBR Burkeville” – many just call it Burkeville based on its mailing address. The state legislature ordered half of the cells at the facility double-bunked in 2011 to accommodate its rapidly diminishing available bed space to warehouse shadow prisoners after the completion of their sentences.  This increased the capacity of the facility from 300 beds to 450 beds. In June 2018 ground was broken on new construction to dramatically expand the capacity of the facility – though the state doesn’t seem able to accurately disclose how many beds are actually being added.

In 2018 during the special session, the Virginia General Assembly appropriated funds in the budget bill (HB5002) for fiscal year 2020 to begin operating and housing persons in 72 new beds in the expansion section of VCBR. Subsection B of Item 328 of HB5002 indicates, “Out of the amounts appropriated in this Item and Item 325, $7,761,111 the second year from the general fund is provided for the staffing, equipment, and other costs of operating 72 new beds at the expanded VCBR beginning in August, 2019.” It is almost August of 2020 now and to our knowledge VCBR has not completed the expansion or begun operating any new beds in the expansion section of the facility in Burkeville. Which begs the question, what happened to the $7,761,111 appropriated to begin operating this area a full year ago.

The double bunking of VCBR was supposed to be temporary, if they are adding beds they should remove or revert the double bunked beds to single residence rooms.

Jason Wilson, VCBR Facility Director, has explicitly said that there are no plans to un-double bunk VCBR.

If they were to revert the 150 cells that were double bunked to single rooms, and the 182 bed figure is correct, then they would only be adding 32 new beds.

The 76 bed difference cannot be attributed to a question of cells vs bed space, because the secretaries report from Nov. 15, 2018 specifically calls them beds (not cells or “rooms”), and if the facility were reverting the double bunked cells to single cells, then the total number of available beds would go down by 150 beds not 76. 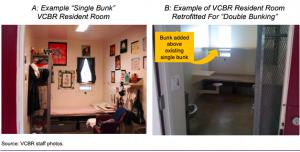 We haven’t been able to ascertain what the true scope of the expansion is. The total budget for the new expansion project at VCBR was $110 million. If 258 beds are being created then expansion is costing $426k per bed. But, if the facility is only being expanded by 182, then the cost per bed is even higher at $604k per bed. This is an incredible failure for the allocation of limited resources of the commonwealth of Virginia, especially during a global pandemic and a national recession. The commonwealth doesn’t seem to know how many beds they are building, but all reports have been abundantly clear that DBHDS plans on running out of bed space again within two years of completion of the current expansion project. Will Virginia taxpayers be asked to cough up another $110 million in the middle of a pandemic-caused recession to build more cages to warehouse people who have already completed their sentences?

If so, they should probably start construction now.