“Hersey Lelaind knew he was in trouble — just not how much trouble. He and a housemate had been on a drive, and Lelaind had been smoking pot. When they returned to their home in Vacaville, California, the sheriff’s department was waiting….

“That was in 2006, when Lelaind was 26 years old. He’s been kept under lock and key ever since. His problem wasn’t the drug bust itself. But the bust prompted the authorities to review Lelaind’s checkered past. As a teenager, he had been convicted for sexual abuse against a minor — and had served his time.

“That fact, along with other aspects of his criminal and life history, were entered into the ‘Static-99,’ a little-known but highly influential questionnaire that critics contend is being tragically misused. The test spit out a score that set him on the path to being locked up in a state psychiatric facility. Why? Because he might commit another crime in the future. He doesn’t know if he will ever be released.”

So begins an expose on the U.S. civil commitment industry by Peter Aldhous, an award-winning science writer. Writing for Buzzfeed, Aldhous traces the stories of both Hersey Lelaind, an African American man from San Francisco, and Wayne Hicks, a gay man from the Deep South, to illustrate the life-shattering consequences of getting a bad score on a badly flawed actuarial risk instrument. 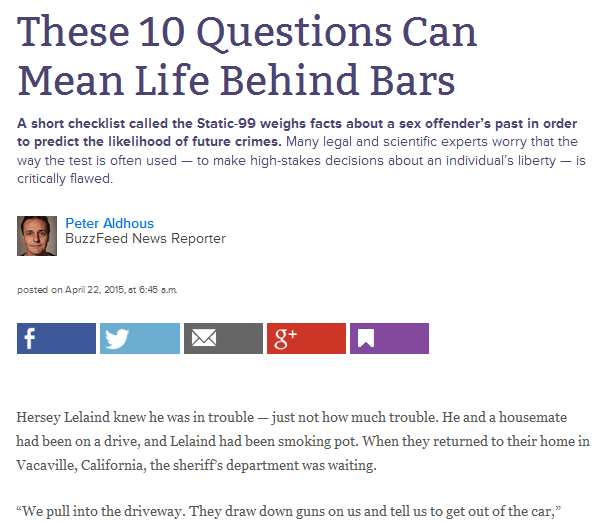 The dramatically different outcomes for Lelaind and Hicks underscore the hit-or-miss nature of risk assessment, where the difference between freedom and a life behind bars can be something as random as which evaluator is assigned to the case or what risk tool that evaluator chooses to employ.

The featured narratives hold special significance for me, because I was retained as an expert in each case. Hicks was set free after the federal prosecutor read my report, while Lelaind went to trial and was civilly committed — despite the fact that he is neither a pedophile nor a rapist.

Word on the street is that the Buzzfeed piece, “These 10 Questions Can Mean Life Behind Bars,” is getting a lot of, well, buzz. I encourage readers to share it widely. Hopefully, it can help to foster public and professional dialogue on the implicit biases undergirding the civil commitment enterprise.