Home 2 Patience is no virtue on MSOP injustice

Patience is no virtue on MSOP injustice

A federal judge seems willing to give the state more time. There’s scant evidence it will be used well.

For many years, critics of the Minnesota Sex Offender Program have worried that this state may be guilty of cruel injustices.

They’ve worried that Minnesota’s sweeping, inconsistent system for dumping sex offenders who have completed prison sentences into so-called “treatment centers” may be imposing retroactive life sentences on some “clients” who pose no serious threat to the public, while giving them no effective treatment.

As of this summer, this is no longer a worry.

It took experts appointed by a federal court about two months to find what Minnesota officialdom has been unable to find in two decades — people buried alive in MSOP who have no earthly business there and should be released or transferred to another program.

And they’ve barely begun to look.

Unfortunately, a combination of legal complexities and deference toward state officials has caused even U.S. District Judge Donovan Frank to let injustice continue awhile longer. Earlier this month,Frank declined to release or transfer the MSOP inmates his experts had asked him to liberate. Instead, he ordered an expedited trial of class-action claims that the entire MSOP program is unconstitutional. 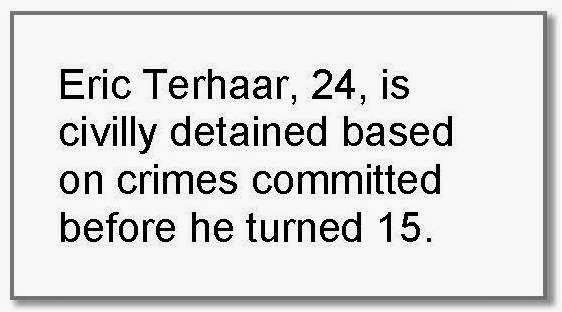 About 20 states have “civil commitment” programs like Minnesota’s. Most were enacted in the crime-plagued early 1990s out of legitimate fears that some habitual sex offenders are too dangerous to be released. But many of the other states with such programs regularly review clients’ cases and have developed less-restrictive forms of supervision for offenders who are less dangerous or are making progress in treatment.

In Minnesota, attempts to contain or reform MSOP have repeatedly become politicized. The result is that the state boasts the largest per-capita population of committed offenders in the nation (nearly 700, costing about $120,000 a year each), in a program offering nothing but prison-like incarceration and no serious path toward success in treatment and release. Just two clients have emerged in the program’s whole history.

Only last winter, Gov. Mark Dayton released a letter to his Department of Human Services, which runs MSOP, noting that he likes the program just fine the way it is and ordering the department to abandon its efforts to move some clients toward release. He cited “gamesmanship” by his political opponents as the reason. 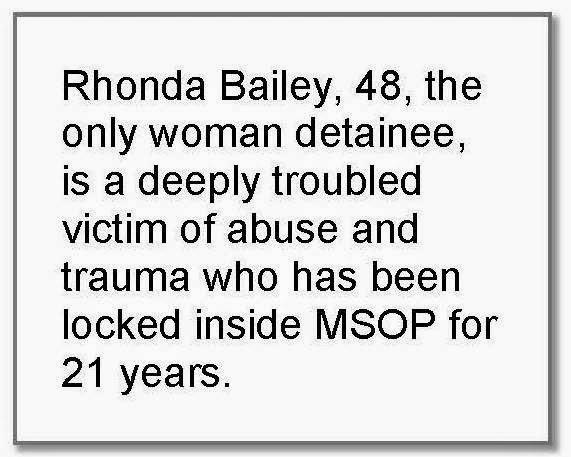 Judge Frank seems rather less sanguine about MSOP. In February, as part of the class-action suit challenging the program’s constitutionality, he put four experts to work examining MSOP — including a sample of individual client files. They quickly brought forward two cases they wanted the judge to see right away.

One involves 24-year-old Eric Terhaar, who has been in MSOP for five years on the basis of offenses committed before he was 15. Insisting that a juvenile record of this kind should be viewed differently than adult sex crimes, the court experts unanimously insisted that “there is little evidence to suggest that Mr. Terhaar is a dangerous sexual offender … .” He should be “unconditionally discharged,” they said.

The other case brought to the judge is that of Rhonda Bailey, 48, locked inside MSOP since 1993 as the program’s only woman. Suffering an “intellectual disability,” a deeply troubled victim of abuse and trauma since childhood, Bailey, the judge wrote, is being “housed on the St. Peter campus of MSOP as the only female on a unit of all male high risk sexual offenders.”

This “unprecedented” achievement isn’t the sort of distinction Minnesota usually boasts of. The experts have a notion that Bailey, while clearly needing treatment and supervision, might do better in “a facility where she can receive care and treatment that is sensitive to both her gender and her clinical presentation.”

Suddenly, the state seems to think so, too. Confronted with the Bailey and Terhaar cases in hearings before Frank this summer, state officials are now apparently scrambling to find an alternative treatment setting for Bailey and to move Terhaar toward provisional release. (It’s also worth noting that lately state courts have been scrutinizing MSOP commitments more rigorously.)

For now, Judge Frank seems willing to be patient while the state’s processes unfold. On Aug. 11, he declined to find continued confinement of Terhaar and Bailey unconstitutional, but said he would revisit the questions if the state’s efforts prove inadequate.

Meanwhile, Frank wants to get on with the trial in the broader class-action case. Last week, he set Feb. 9 as the trial date.

“It is obvious,” Frank wrote in his Aug. 11 order, “that but for this litigation, Terhaar … would likely have languished for years in the prison-like environment of MSOP-Moose Lake without any realistic hope of gaining his freedom. And of course it is of great concern to the Court that this may not be an aberrant case [but] symptomatic of a larger systemic problem. … This concern is heightened by the experts’ opinion about the grossly inadequate — even shocking — treatment of Bailey … .”

There is as yet no explanation, the judge wrote, of “how this troubling state of affairs came about.”

That one’s easy, your honor. It came about because too many judges over too many years have been too patient waiting for Minnesota’s politicians to do the right thing.

*D. J. Tice is Commentary Editor for the Star Tribune, and is a member of the newspaper’s Editorial Board. He has been a writer, editor and publisher in Twin Cities journalism for more than 30 years. A former political editor, he is the author of two books of popular history. This essay originally appeared in the Star Tribune on August 26, 2014 and was reprinted with the written permission of Mr. Tice.