A new government report reinforces harmful misconceptions about people convicted of sex offenses. Here’s our take on how to parse the data.

By now, most people who pay any attention to criminal justice reform know better than to label people convicted of drug offenses “drug offenders,” a dehumanizing label that presumes that these individuals will be criminals for life. But we continue to label people “sex offenders” – implying that people convicted of sex offenses are somehow different.

A new report released by the Bureau of Justice Statistics should put an end to this misconception: The report, Recidivism of Sex Offenders Released from State Prison: A 9-Year Follow-Up (2005-2014), shows that people convicted of sex offenses are actually much less likely than people convicted of other offenses to be rearrested or to go back to prison. 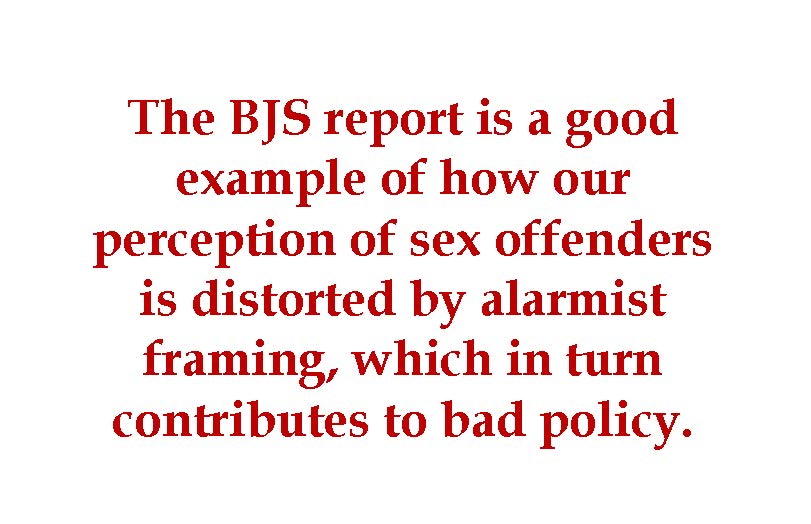 But you wouldn’t know this by looking at the report’s press release and certain parts of the report itself, which reinforce inaccurate and harmful depictions of people convicted of sex offenses as uniquely dangerous career criminals. The press release and report both emphasize what appears to be the central finding: “Released sex offenders were three times as likely as other released prisoners to be re-arrested for a sex offense.” That was the headline of the press release. The report itself re-states this finding three different ways, using similar mathematical comparisons, in a single paragraph.

The new BJS report, unfortunately, is a good example of how our perception of sex offenders is distorted by alarmist framing, which in turn contributes to bad policy. That this publication was a priority for BJS at all is revealing: this is the only offense category out of all of the offenders included in the recidivism study to which BJS has devoted an entire 35-page report, even though this group makes up just 5% of the release cohort. This might make sense if it was published in an effort to dispel some myths about this population, but that’s not what’s happening here.

Framing aside, the recidivism data presented in the BJS report can offer helpful perspective on the risks posed by people after release. Whether measured as rearrest, reconviction, or return to prison, BJS found that people whose most serious commitment offense was rape or sexual assault were much less likely to reoffend after release than those who served time for other offense types. The BJS report shows that within 9 years after release:

While the data were more limited on returns to prison,1 the study found that within 5 years after release, people who had served sentences for rape or sexual assault also had a lower return-to-prison rate (40%) compared to the overall rate for all offense types combined (55%). BJS notes that some of these returns to prison were likely for parole or probation violations, but because of data limitations, it is impossible to say how many were for new offenses, much less how many were for rape or sexual assault.

In sum, the BJS data show that people who served time for sex offenses had markedly lower recidivism rates than almost any other group. Yet the data continue to be framed in misleading ways that make it harder to rethink the various harmful and ineffective punishments imposed on people convicted of sex offenses.

The recidivism data suggest that current legal responses to people convicted of sex offenses are less about managing risk than maximizing punishment. The desire for retribution is understandable; unquestionably, rape and sexual assault inflict serious and lasting trauma. But our criminal justice system does a poor job of providing survivors of rape, sexual assault, and other violent crimes what they really want. In a 2016 survey of crime survivors, the Alliance for Safety and Justice found that, “Survivors of violent crime — including victims of the most serious crimes such as rape or murder of a family member — widely support reducing incarceration to invest in prevention and rehabilitation and strongly believe that prison does more harm than good.” But more prison time is the default response: those released after serving sentences for rape and sexual assault served longer sentences, with a median sentence of 5 years (compared to 3 years for all others combined) and more than a quarter serving 10 years or more before release.

And for many people convicted of sex offenses, confinement doesn’t end when their prison sentence does. Twenty states continue to impose indefinite periods of involuntary confinement under civil commitment laws – after individuals have completed a sentence (or, in some cases, before they are even convicted). Proponents justify the practice as “treatment,” but conditions of civil commitment are punitive and prison-like, and this confinement is hard to justify with the recidivism data we have. The likelihood of post-release arrest for another rape or sexual assault for this group is less than 2% in the first year out of prison, and after 9 years, fewer than 8% have been rearrested for a similar offense. Those who are released at age 40 or older are even less likely to be rearrested for another sex offense, with re-arrest rates about half those of people who are released at age 24 or younger.

After prison, a number of other special restrictions make reentry especially challenging for those who have served sentences for sex offenses, including registration, public notification, and restrictions to residence and employment. (Even before release, some restrictions make it difficult for some people to leave prison when they would otherwise be paroled.) These restrictions tend to cause more problems than they solve. Residence restrictions in particular have contributed to homelessness and other problems in cities where they leave little room for returning citizens. According to a 2015 U.S. Department of Justice brief, “residence restrictions may actually increase offender risk by undermining offender stability and the ability of the offender to obtain housing, work, and family support.”

In another recent academic article, Hanson et al. agree that these additional restrictions are “justified on the grounds of public protection,” even though the underlying assumptions may be wrong: “Individuals are targeted because policy-makers believe they are likely to do it again. This is a testable assumption, and, as it turns out, not entirely true.” Their analysis shows that individual recidivism risk varies widely, can be low enough to be indistinguishable from that of people convicted of non-sex offenses, and drops predictably over time. The data published by BJS track with those findings.

Collectively, the research seems fairly clear: our responses to people convicted of sex offenses do not reflect the actual – generally low – risks they present. Instead of panicking about the small portion who reoffend after release, it’s time we talk more rationally about responses that effectively support desistance from crime – and serve the actual needs of victims of violence.