Adversarial Allegiance: The Frontier of Research in Forensic Psychology

A colleague recently commented on how favorably impressed he was about the open-mindedness of two other forensic examiners, who had had the courage to change their opinions in the face of new evidence. The two had initially recommended that a man be civilly committed as a sexually violent predator, but changed their minds three years later .

My colleague’s admiration was short-lived. It evaporated when he realized that the experts’ change of heart had come only after they switched teams: Initially retained by the government, they were now in the employ of the defense. [Just Future Project finds this remarkable because often in pre-crime preventative detention cases, the ‘experts’ never actually change their allegiance regardless of who’s paying them — they remain biased toward the state because that’s where a majority of their funds come from.] 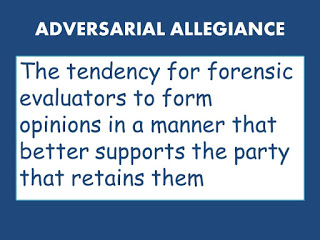 What is Adversarial Allegiance

“Adversarial allegiance” is the name of this well-known phenomenon in which some experts’ opinions tend to drift toward the party retaining their services. This bias is insidious because it operates largely outside of conscious awareness, and can affect even ostensibly objective procedures such as the scoring and interpretation of standardized psychological tests.

Partisan bias is nothing new to legal observers, but formal research on its workings is in its infancy. Now, the researchers spearheading the exploration of this intriguing topic have put together a summary review of the empirical evidence they have developed over the course of the past decade. The review, by Daniel Murrie of the Institute of Law, Psychiatry and Public Policy at the University of Virginia and Marcus Boccaccini of Sam Houston State University, is forthcoming in the Annual Review of Law and Social Science.

Forensic psychologists’ growing reliance on structured assessment instruments gave Murrie and Boccaccini a way to systematically explore partisan bias. Because many forensic assessment tools boast excellent interrater reliability in the laboratory, the team could quantify the degradation of fidelity that occurs in real-world settings. And when scoring trends correlate systematically with which side the evaluator is testifying for, adversarial allegiance is a plausible culprit.

Such bias has been especially pronounced with the Psychopathy Checklist-Revised, which is increasingly deployed as a weapon by prosecutors in cases involving future risk, such as capital murder sentencing hearings, juvenile transfer to adult courts, and sexually violent predator commitment trials. In a series of ground-breaking experiments, the Murrie-Boccaccini team found that scores on the PCL-R vary hugely and systematically based on whether an expert is retained by the prosecution or the defense, with the differences often exceeding what is statistically plausible based on chance.

One shortcoming of the team’s initial observational research was that it couldn’t eliminate the possibility that savvy attorneys preselected who were predisposed toward one side or the other. To test this possibility, two years ago the team designed a devious experimental study in which they recruited forensic psychologists and psychiatrists and randomly assigned them to either a prosecution or defense legal unit. To increase validity, the experts were even paid $400 a day for their services.

The findings provided proof-positive of the strength of the adversarial allegiance effect. Forensic experts assigned to the bogus prosecution unit gave higher scores on both the PCL-R and the Static-99R than did those assigned to the defense. The pattern was especially pronounced on the PCL-R, due to the subjectivity of many of its items. (“Glibness” and “superficiality,” for example, cannot be objectively measured.)

The research brought further bad tidings. Even when experts assign the same score on the relatively simple Static-99R instrument, they often present these scores in such a way as to exaggerate or downplay risk, depending on which side they are on. Specifically, prosecution-retained experts are far more likely to endorse use of “high-risk” norms that significantly elevate risk.

Several somewhat complimentary theories have been advanced to explain why adversarial allegiance occurs. Prominent forensic psychologist Stanley Brodsky has attributed it to the social psychological process of in-group allegiance. Forensic psychologists Tess Neal and Tom Grisso have favored a more cognitive explanation, positing heuristic biases such as the human tendency to favor confirmatory over disconfirmatory information. More cynically, others have attributed partisan bias to conscious machinations in the service of earning more money. Murrie and Boccaccini remain agnostic, saying that all of these factors could play a role, depending upon the evaluator and the situation.

A Glimmer of Hope?

One glimmer of hope is that the allegiance effect is not universal. The research team found that only some of the forensic experts they studied are swayed by which side retains them. Hopefully, the burgeoning interest in adversarial allegiance will lead to future research exploring not only the individual and situational factors that trigger bias, but also what keeps some experts from shading their opinions toward the retaining party.

Even better would be if the courts took an active interest in this problem of bias. Some Australian courts, for example, have introduced a method called “hot tubs” in which experts for all of the sides must come together and hash out their differences outside of court.

In the meantime, watch out if someone tries to recruit you at $400 a day to come and work for a newly formed legal unit. It might be another ruse, designed to see how you hold up to adversarial pressure.

The article is: Adversarial Allegiance among Expert Witnesses, forthcoming from The Annual Review of Law and Social Science. To request it from the first author, click HERE.